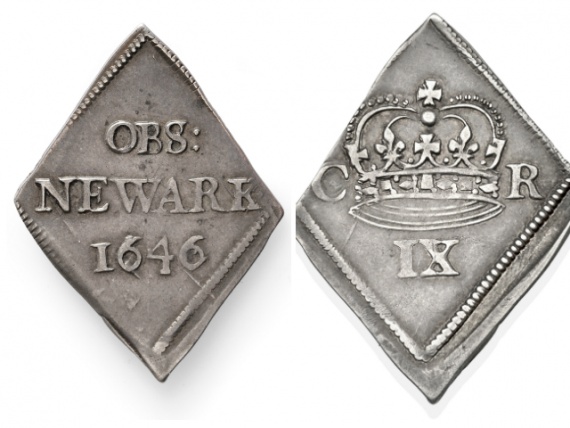 One of the most interesting coins in a sale was a silver ninepence minted during the siege of Newark in the English Civil War.

This rare, diamond-shaped coin was minted in Newark in the reign of Charles I, as emergency coinage when the town was under siege.

Newark was a site of strategic importance to both Royalists and Parliamentarians during the Civil War, as two major roads – the Great North Road, and the Fosse Way – ran through the town.

Occupied by Royalists during the early years of the war, Newark was besieged by Parliamentarians three times – briefly in 1643 and 1644, and then for a little over five months in 1645-6.

It was during this long siege that the present coin was made.

Sixpence, ninepence, shilling and halfcrown coins were all made following the same diamond shape, and most were made from pieces of metal cut from silver tableware and other decorative objects.

The coins were then stamped with the crown, with Roman Numerals showing the coin’s value, and with the name of the town.

Half-crown siege coins are not uncommon, but the ninepence is rare, and sixpences are even rarer. The silver ninepence sold for a hammer price of £1,600 at the Tennants sale of coins last week.

The top lot of the sale in the North Yorkshire was a George VI Gold Proof Set from 1937, comprising £5, £2, sovereign and half sovereign. Still in their original case of issue, the set reached a hammer price of £7,800.