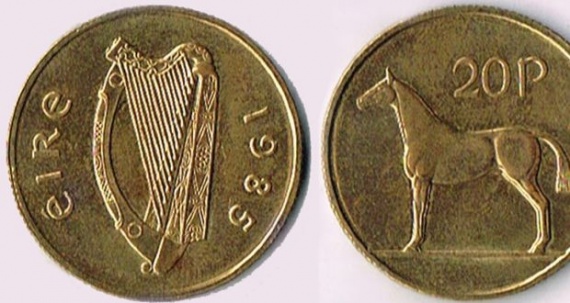 Whyte’s said the coin was a “trial piece” for a new coin scheduled to be minted the following year, 1986. In 1985, the Central Bank produced an estimated 500 coins, issued to various companies and organisations “to facilitate calibration of vending machines and other coin-operated devices such as public telephones”. The coins were supposed to be returned to the Central Bank to be melted down but about 50 never made it and, to date, about 10 have been recorded in private ownership.

The example that was sold came from a retired employee of Telecom Éireann, who tested it 30 years ago in coin-operated telephones, and auctioneer Ian Whyte commented after the sale: “It’s a good job he didn’t spend it on a cup of coffee at the time.”

Mr Whyte warned coin collectors looking for this “rarest of modern Irish coins” to beware of forgeries and said “collectors are advised to check provenance and get professional numismatic advice before purchasing. As the coin was not circulated it is extremely unlikely to be found in old hoards of pre-euro change”.