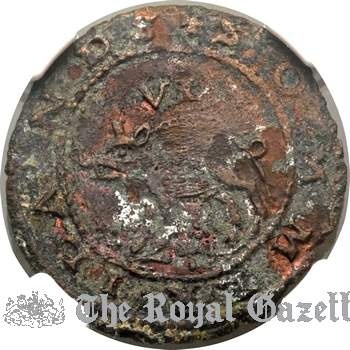 The coin, a rare Sommer Islands sixpence popularly known as “hogge money”, was one of a collection of coins sold at auction in New York on October 28. The event, presented by Heritage Auctions, featured the Eugene H Gardner Collection.

Hogge money was reportedly introduced to the Bermuda economy in 1616 — just less than ten years after colonisation began — under the leadership of Daniel Tucker, who served under the auspices of the Bermuda Company. Brass pieces were introduced in denominations of twopence, threepence, sixpence and a shilling with Roman numerals representing their value. While they were used as currency, tobacco remained the main medium of exchange for larger transactions.

A description of the auction coin states: “This exceptional example of the Sommer Islands sixpence retains some of its original silver wash and much of the design motifs. 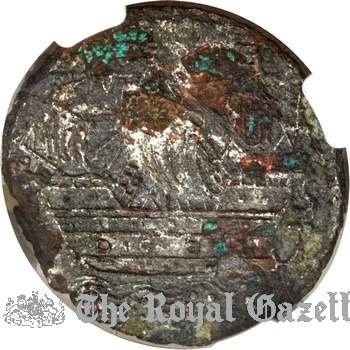 “It is the rare small portholes variant, with substantial detail remaining on the sailing ship motif on the reverse. Three of the four portholes are visible. The obverse ‘hogge’ is sharply visible, as are the ‘SOMMER ILANDS’ legend and denomination. The never cleaned surfaces exhibit beautiful red and green oxidised patina that attest to this coin’s originality.”