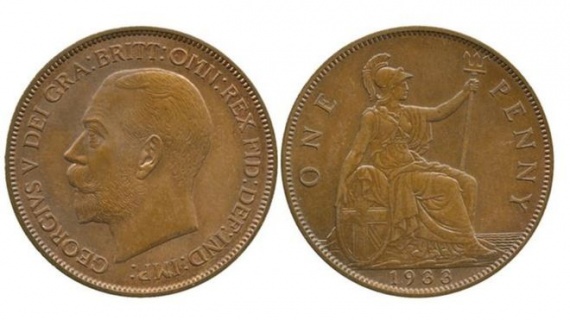 The coin sold is known as a «Pattern» version, as it was presented as a prototype, but never went in to production.

It is the first time that any of the Pattern coins have come up for auction.

Commenting on the record price, a spokesperson for the auction house, AH Baldwin and Sons said: «No other bronze coin has ever come close.»

The coin was bought by a private collector. It is not known whether it will be kept in the UK, or taken abroad.
History

A further seven pennies, known as currency coins, were produced in 1933 for ceremonial purposes, but none has recently come up for sale.

It is thought the currency coins could be worth twice as much as the Pattern versions.

The reason so few were produced was that the Royal Mint had a surplus of penny coins in 1932, and did not need any more in the following year.

Most of the 1933 pennies are in private hands, although one of the Pattern versions is in the Royal Mint's museum. Others, it is thought, have been buried under buildings as part of a «time capsule».