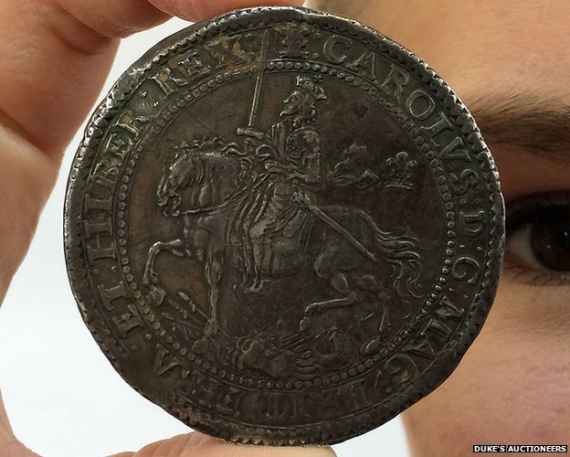 The 5.2cm (two inch) coin was taken to the auction house in Dorchester, Dorset, by its owner who was unaware of its significance.

The Declaration Pound, which dates from 1643, was described by auctioneers as «extremely rare».

It was struck in Oxford, a year after the English Civil War broke out, at a new mint created to launch an official currency under Royalist control.

Duke's Auctioneers had expected the coin to fetch £50,000.

It had been handed down through several generations to the current owner, who said she did not know where it had originally come from.

The coin marks Charles I's attempts to regain his failing power from the Parliamentarians led by Oliver Cromwell.

A legend inscribed on the back of the coin in Latin reads: «Let God arise and let his enemies be scattered».

It is seen as a declaration of the king's power and his belief in absolute monarchy.