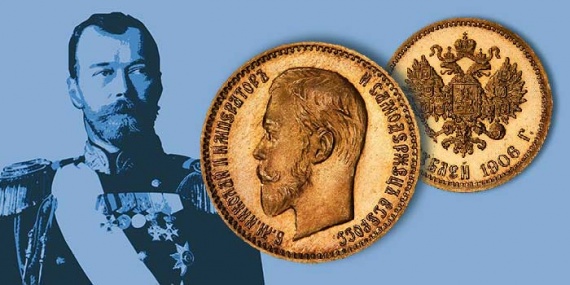 There are many fantastic numismatic rarities among Russian coinage. One such coin is the Russian 1906 5 Roubles, which has a mintage of only 10 pieces. It is a stopper for anyone hoping to complete a set of 20th-century gold or Nicholas II 5 Roubles gold coin sets. One example was recently submitted to Professional Coin Grading Service (PCGS) for grading and became the first specimen of the 10 pieces struck to be certified as authentic.

Across all gold production at the St. Petersburg Mint in Russia in 1906, just 10 examples of the 5 Roubles and 10 examples of the 10 Roubles were struck. All of the coins were produced in Proof. The coins have become highly prized rarities for numismatists who dream of completing sets of Russian coinage.

On April 22, 2018, an example of this rarity was featured in Нумизматическая Фирма “Русское Наследие” #6, or Numismatic Firm “Russian Heritage” Auction #6. The coin had been pedigreed back to 1931, when it had previously sold in Adolph Hess Auction #204 as lot 2105. The coin was a consignment being sold as one of the duplicates of Russian museums. Some 87 years later, the coin reappeared for sale in 2018 still in pristine condition, when it brought $270,000 USD.

The young Soviet Union, which had just come to power in 1922, was in desperate need of money to finance the industrialization of the country’s founding. The plan was to purchase new equipment and technology and build whole factories for national industrialization. So, the Bolsheviks turned to the Russian museums, and especially the biggest one in the country – the Hermitage Museum of Saint-Petersburg, the second largest museum in the world. Selling duplicates and select pieces from the national museums was a practice of museums under the reign of the tsars, but the goal at that time was to finance purchases of other important works of art or whole collections. In the first years of the Soviet Union, the Bolsheviks had little success trying to sell pieces, as they didn’t have trade relations with Western countries. They still believed in the international communist revolution embracing the whole world, and selling nationally owned art and coins was something they didn’t have any experience in organizing.

A few years later, in 1928, the decision was taken to bring this operation to a completely new level. The Communist government ordered the Hermitage Museum to prepare a list of works of art to sell to garner a total sum of 1.3 million roubles (about $668,850). It was very clear to all that to meet the demand of the government the museum would have to sell masterpieces, leading to the sale of 250 paintings – some of which had been in the Hermitage collection since Catherine the Great. These artworks included masterpieces from Botticelli, Raphael, Rembrandt, Rubens, Jan van Dyck, and many others. Some 21 of these paintings would be donated to the National Gallery of Art in Washington, D.C. by purchaser Andrew Mellon.

In the seven years between 1921 and 1927, a total of 117,000 works of art were sold for 3.3 million roubles (about $1.698 million). And in the four years between 1928 and 1931, over one million works of art were sold for almost 70 million roubles (about $36 million). Among them were the duplicates from the numismatic collection, and among these was this 1906 5 Roubles. Today the Hermitage Museum still has over three million items, including the numismatic collection, which accounts for about a third of the collection.

In 2020, the coin was submitted to the PCGS Europe office in Paris raw for grading. The coin was then transferred to the PCGS United States office in California for authentication and grading in a Paris Express service submission and was found to indeed be the specimen that was sold in 1931 by Adolph Hess. The coin is graded PCGS PR66+CAM and was encapsulated with its pedigree as “Ex. 1931 Russian Museum Sale.”

“It is a great honor that PCGS was chosen as the service of choice to protect this great numismatic treasure,” stated PCGS Europe Manager Sergey Bonar.